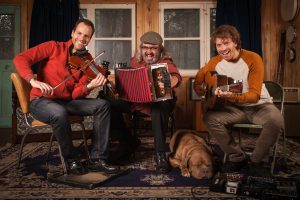 Entré: kr. 70/100
After wowing audiences on his previous tour, Yves Lambert is back with his Trio in the spring of 2016. Well known for his charismatic stage presence, he is considered a reference point when it comes to Québécois folk music. Certain critics even regard him as a guiding light on the whole subject of Québec’s cultural heritage, through his long-time association with the band La Bottine Souriante, in which he was a founding member and pillar of the group from 1976 to 2002. For the past 40 years M. Lambert has been a driving force in giving traditional music the place that it deserves beyond the Québec and Canadia.